Skip to content
Following is an article written by Mark Twain about the Jews, asking a very simple yet extremely smart question about them. Please continue reading past his concluding remarks to find God’s answer to his question, which Tina conveys by quoting Romans 11 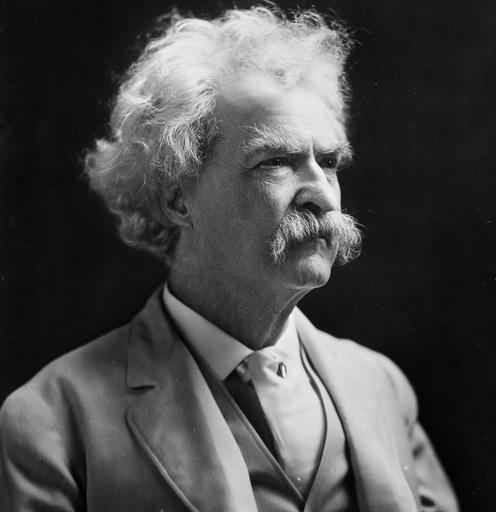 On the Jews
Mark Twain
September 1897  —
If the statistics are right, the Jews constitute but one quarter of one percent of the human race. It suggests a nebulous puff of star dust lost in the blaze of the Milky Way. Properly, the Jew ought hardly to be heard of, but he is heard of, has always been heard of. He is as prominent on the planet as any other people, and his importance is extravagantly out of proportion to the smallness of his bulk.
His contributions to the world’s list of great names in literature, science, art, music, finance, medicine and abstruse learning are also very out of proportion to the weakness of his numbers. He has made a marvelous fight in this world in all ages; and has done it with his hands tied behind him. He could be vain of himself and be excused for it. The Egyptians, the Babylonians and the Persians rose, filled the planet with sound and splendor, then faded to dream-stuff and passed away; the Greeks and Romans followed and made a vast noise, and they were gone; other people have sprung up and held their torch high for a time but it burned out, and they sit in twilight now, and have vanished.
The Jew saw them all, survived them all, and is now what he always was, exhibiting no decadence, no infirmaties, of age, no weakening of his parts, no slowing of his energies, no dulling of his alert but aggressive mind. All things are mortal but the Jews; all other forces pass, but he remains. What is the secret of his immortality?  — Mark Twain, September 1897    (Quoted in The National Jewish Post & Observer June 6 1984)
***         ***         ***         ***         ***         ***
The answer to Mark Twain’s question can be found in Romans 11 of the Holy Bible in the New Testament. Praise God! Just further evidence of God. Further evidence of Jesus Christ.
From Romans 11 (KJV)
Author: Paul the Apostle
Relevant below:
“Elijah” = a prophet from the Old Testament
“Baal” = a fake god that was worshiped
“Gentiles” = everyone outside the 12 tribes of Israel, and to whom the gift salvation is being offered

11 I ask, then, has God rejected his people? By no means! For I myself am an Israelite, a descendant of Abraham, a member of the tribe of Benjamin. 2 God has not rejected his people whom he foreknew. Do you not know what the Scripture says of Elijah, how he appeals to God against Israel? 3 “Lord, they have killed your prophets, they have demolished your altars, and I alone am left, and they seek my life.” 4 But what is God’s reply to him? “I have kept for myself seven thousand men who have not bowed the knee to Baal.” 5 So too at the present time there is a remnant, chosen by grace. 6 But if it is by grace, it is no longer on the basis of works; otherwise grace would no longer be grace.
7 What then? Israel failed to obtain what it was seeking. The elect obtained it, but the rest were hardened, 8 as it is written,
“God gave them a spirit of stupor,
eyes that would not see
and ears that would not hear,
down to this very day.”
9 And David says,
“Let their table become a snare and a trap,
a stumbling block and a retribution for them;
10 let their eyes be darkened so that they cannot see,
and bend their backs forever.”

11 So I ask, did they stumble in order that they might fall? By no means! Rather, through their trespass salvation has come to the Gentiles, so as to make Israel jealous. 12 Now if their trespass means riches for the world, and if their failure means riches for the Gentiles, how much more will their full inclusion mean!
13 Now I am speaking to you Gentiles. Inasmuch then as I am an apostle to the Gentiles, I magnify my ministry 14 in order somehow to make my fellow Jews jealous, and thus save some of them. 15 For if their rejection means the reconciliation of the world, what will their acceptance mean but life from the dead? 16 If the dough offered as firstfruits is holy, so is the whole lump, and if the root is holy, so are the branches.
17 But if some of the branches were broken off, and you, although a wild olive shoot, were grafted in among the others and now share in the nourishing root of the olive tree, 18 do not be arrogant toward the branches. If you are, remember it is not you who support the root, but the root that supports you. 19 Then you will say, “Branches were broken off so that I might be grafted in.” 20 That is true. They were broken off because of their unbelief, but you stand fast through faith. So do not become proud, but fear. 21 For if God did not spare the natural branches, neither will he spare you. 22 Note then the kindness and the severity of God: severity toward those who have fallen, but God’s kindness to you, provided you continue in his kindness. Otherwise you too will be cut off. 23 And even they, if they do not continue in their unbelief, will be grafted in, for God has the power to graft them in again. 24 For if you were cut from what is by nature a wild olive tree, and grafted, contrary to nature, into a cultivated olive tree, how much more will these, the natural branches, be grafted back into their own olive tree.

The Mystery of Israel’s Salvation

25 Lest you be wise in your own sight, I do not want you to be unaware of this mystery, brothers: a partial hardening has come upon Israel, until the fullness of the Gentiles has come in. 26 And in this way all Israel will be saved, as it is written,
“The Deliverer will come from Zion,
he will banish ungodliness from Jacob”;
27 “and this will be my covenant with them
when I take away their sins.”
28 As regards the gospel, they are enemies for your sake. But as regards election, they are beloved for the sake of their forefathers. 29 For the gifts and the calling of God are irrevocable. 30 For just as you were at one time disobedient to God but now have received mercy because of their disobedience, 31 so they too have now been disobedient in order that by the mercy shown to you they also may now receive mercy. 32 For God has consigned all to disobedience, that he may have mercy on all.
33 Oh, the depth of the riches and wisdom and knowledge of God! How unsearchable are his judgments and how inscrutable his ways!
34 “For who has known the mind of the Lord,
or who has been his counselor?”
35 “Or who has given a gift to him
that he might be repaid?”
36 For from him and through him and to him are all things. To him be glory forever. Amen.
(end Bible quote)      ***         ***         ***         ***         ***         ***
The Bible tells us that ALL OF ISRAEL will be saved in the end – after the saints (those that believe on Jesus Christ) have seen our final days – and this is the answer to Mark Twain’s question.
–Tina Burris  5/31/2018

Look for our partners via AM radio throughout Africa (and worldwide in good DX’ing weather) – on the quintessential Voice of Hope network on: 9680 & 13680 kHz, or visit VoiceOfHope.com ,  and select Listen Live.

We had multiple seasons airing there as “Bible at the Beach” across most of Africa, as well as two US shortwave radio seasons, reaching many states and even other countries on WBCQ. These slots ended but we look forward to being back on shortwave airwaves sometime soon as well. We are always available here, online!

Promote educational family fun getting into the easy, yet thrilling hobby of radio listening, helping to keep it alive — the Shortwave AM/SSB and Mediumwave AM bands are havens for Christian listening!

As long as we put Christ first in our lives, who says you can’t explore God’s wonderful creation in science, or glorify him (in part) by increasing practical our knowledge?

Get help with homework and more at:

Whoever lives in love lives in God, and God in them.” Ephesians 4:2: “Be completely humble and gentle; be patient, bearing with one another in love.” 1 Peter 4:8: “Above all, love each other deeply, because love covers over a multitude of sins.” John 15:12: “My command is this: Love each other as I have loved you.”